Moroccan Surf Adventures had a great time hosting this fabulous bunch of 16-18 year olds (and their teachers!) from Richard Huish College in February 2013.

In early October, dozens rushed to Richard Huish College at an early hour to try and secure a place on the sought after Morocco surf trip and after a long wait twenty six lucky students were successful.

Five months later we embarked on an epic adventure of sun, surf, sea and sand. After a three hour coach journey we arrived at Gatwick airport where we met Nigel and Denny, the two guys who run Moroccan Surf Adventures. After an incident free flight we touched down in Marrakech. Fatigued from flying, we were taken to a local restaurant for our first taste of Moroccan food. We were then taken to our home for the week, and what a home it was. A spacious multi-storey villa was presented to us and we made our selves comfortable with our new surroundings. 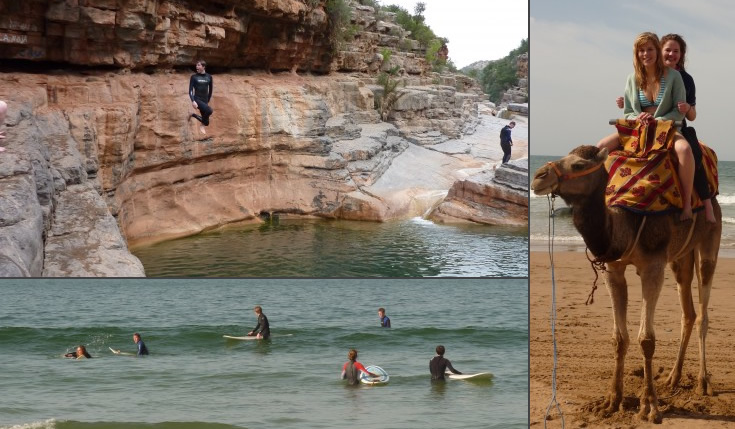 The morning came, wetsuits were fitted and surfboards were selected. After a quick but filling breakfast we headed to the local beach in our massive 4X4’s. Surf tuition was given in the morning and we then entered the surprisingly warm Atlantic Ocean. Natural surfers were identified quickly with many people showing early prowess. Later that day we were presented with our first meal made by Mo (the best chef in Morocco) - we were fed like kings and queens every night. A great atmosphere and group relationship was developing, helped by card games and musical performances from members of the group.

A few days later we went to the Jimmy Hendrix named ‘Paradise Valley’. This beautiful network of river systems, waterfalls and plunge pools was essentially ours for the day. Courageous jumps from rocks were performed by members of the group, a camp fire was lit by some of the guys in the group and a very enjoyable lunch was devoured. Again we returned to the Villa and friendships developed throughout the evenings along with fine food and drink.

Every morning we were given the chance take part in a yoga lesson with the lovely Swedish instructor, this allowed people to improve their core strength and surf balance.

One of the highlights of the trip was our visit to the market (souk) in the nearby city of Agadir. This was something many on the trip had never experienced – the ever changing electric atmosphere of an Arabic market. Many people left the market with audacious deals on spices, ‘genuine’ clothing, electrical devices and many other purchases all at ‘good price for you’.

As the week went on our surfing ability and confidence was growing. On one of the last days of the trip a selection of surfers went down the coast to the larger waves giving a greater challenge and a new set of surroundings. At this point two group members wondered into a local village where they were invited into a local family home and given the true Moroccan hospitality of mint tea and warm delicious bread.

The week was a true combination of friendship development, surfing, banter and hilarious incidents. It was safe to say when we returned back to Huish we were all wishing we could begin the week all over again.

Postscript. Moroccan Surf Adventures had a great time hosting this fabulous bunch of 16-18 year olds (and their teachers!) from Richard Huish College in February 2013. A number of staff commented on their good humour and great manners that put many older adults to shame. We are delighted to say that they are already booking to return next year and we can’t wait to welcome them back.

* All payments are processed in GBP. All other currency prices are for reference only and will be subject to exchange rates at the time of payment.
** Bus tickets are best purchased directly by the traveller(s) at an additional cost.
These reference rates were last updated on 23/01/23. Please refer here for an up-to-date conversion.

Fill out the form below and we'll get back to you with availability
and answers to any questions you have.

IMPORTANT: To ensure you receive a swift reply from MSA, please add info@morocsurf.com to your address book or download a vCard here.